10 Biblical Reasons to Stand in Worship, 2

Why do we stand so much!?

Check out the reasons given in part one…now for part two:

6. We Stand To Proclaim

“I will pronounce my judgments on my people because of their wickedness in forsaking me, in burning incense to other gods and in worshiping what their hands have made.

“Get yourself ready! Stand up and say to them whatever I command you.”

It’s hard to imagine a prophet proclaiming of God’s truth while reclining in a padded pew. Sure, we don’t often regard ourselves as prophets, but we are nonetheless proclaiming truth in our worship. And standing to do so is quite appropriate.

1 Chronicles 23:30 describes one of the duties of the Levites: “They were to stand every morning to thank and praise the Lord. They were to do the same in the evening.”

During the dedication of Solomon’s temple, we see this:

The priests took their positions, as did the Levites with the Lord’s musical instruments, which King David had made for praising the Lord and which were used when he gave thanks, saying, “His love endures forever.” Opposite the Levites, the priests blew their trumpets, and all the Israelites were standing.” (2 Chronicles 7:6)

While Levites played the instruments that had accompanied David’s praise, all the Israelites stood in worship.

Another place we see this expression demonstrated is in Nehamiah 9:5. The Israelites had gathered for confession and worship. The Levites told them:

“Stand up and praise the Lord your God, who is from everlasting to everlasting.”

And then they began to praise God as they stood:

“Blessed be your glorious name, and may it be exalted above all blessing and praise. You alone are the Lord.

8. We Stand To Confess

And in this same passage in Nehmiah we see that earlier in the day, before they stood to praise, they also stood to confess their sins.

In fact, it says they “stood in their places and confessed their sins”…for a quarter of the day.

It’s probably worth mentioning here that this passage is NOT prescribing THE way to confess sins. Certainly kneeling is appropriate. And I don’t think sittingwould negate 1 John 1:9.

9. We Stand To Petition & Intercede

Often times, we think of petitioning and intercession as going to God on our knees. And that’s certainly an appropriate posture. But there are more than a few scriptures that suggest standing as valid posture.

In Genesis 18, Abraham is petitioning the Lord to save Sodom. It says “Abraham remained standing before the Lord” as he made his famous spare-Sodom-if-you-find-50/45/30/20/10-righteous-people-in-the-city negotiations.

Abraham was both figuratively and literally standing up as he petitioned the Lord.

It reminds me of the well-known “stand in the gap” phrase from Ezekiel 22:30:

“I looked for a man among them who would build up the wall and stand before me in the gap on behalf of the land so I would not have to destroy it, but I found none.”

While I wouldn’t forgo kneeling, there might be something to this standing to petition God and intercede for others. It almost feels like boldness to stand before the Lord. Which just might be biblical. (And I also love the wording of this version, too.)

10. We Stand To Both Pronounce And Receive Blessings

How many of us in our churches “stand to receive the benediction” without really thinking about it.

But it seems like standing is Biblically-driven here, too. When the ark was brought into Solomon’s temple, God’s presence in the form of a cloud filled the place – to the point the priests had to stop working. In the midst of this, we see this happen:

“While the whole assembly of Israel was standing there, the king turned around and blessed them.” (1 Kings 8:14)

Like I mentioned earlier, I don’t think any of these examples negate other postures that can be taken. And we’ll be exploring these other postures and expressions in this series. The bottom line for me, right now, as I begin to take my church through this journey is this:

Posture and physical expression matter in worship. We need to be intentional about it.

A commenter on yesterday’s post referred to the point C.S. Lewis made in The Screwtape Letters. It’s a great quote that we’ll end on today.

The veteran demon writes this to his nephew:

“At the very least, they can be persuaded that the bodily position makes no difference to their prayers; for they constantly forget, what you must always remember, that they are animals and that whatever their bodies do affects their souls” (Letter IV).

Comment below: In what ways are you intentional about standing as you lead worship? 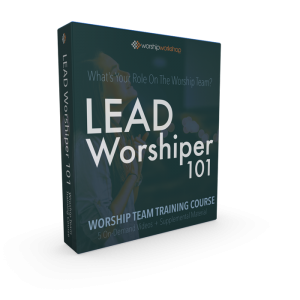 Are Your Team Members Not Expressive and Engaging In Worship?

Find out how this Worship Workshop course can help the be more engaging leader worshipers.

Disclosure of Material Connection: Some of the links in the post above maybe “affiliate links.” This means if you click on the link and purchase the item, I will receive an affiliate commission. Regardless, I only recommend products or services I use personally and believe will add value to my readers. I am disclosing this in accordance with the Federal Trade Commission’s 16 CFR, Part 255: “Guides Concerning the Use of Endorsements and Testimonials in Advertising.”