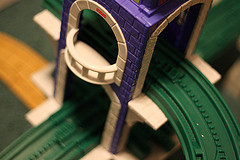 My almost 4-year-old son, Aedan, has been asking for the last few mornings to play “tracks.” Playing tracks means I dump out a large plastic tote containing 189,243 pieces of Fisher-Price’s sickly ingenious father-son toy, GeoTrax, and assemble a system for him to run the trains on. FP knew what they were doing: the trains and tracks are simple and chunky enough to endure abuse by the hands (and feet and teeth) of pre-schoolers, but complex enough to build elaborate systems of bridges and crossovers and cities (if one has purchased enough track packs, of course).

My first few attempts at building a complex track system found that trains either got stuck going one direction or, even worse, were marooned on one section of tracks because I hadn’t set up the switch rails and crossover tracks correctly. And the more systems I built, the more I realized: “I need more tracks!” This is where my wife rolls her eyes and asks Jesus why 1 of her 3 children is a 35 year-old man.

I quickly realized my son doesn’t really care how elaborate the tracks are–he just want to run his trains. And no matter how extensive of a rail universe I build on our living room floor, within a day it all goes back into the tote (usually after all the bazillion pieces have been scattered to the four corners of the room).

That’s how we serve our congregation and our team.

We can make our service like an elaborate rail system, or it can be a simple one. But the pieces have to fit together and it needs to take us to where we need to go. Building a great track (whether simple or complex) allows the musicians and techs to do what they do best. And if the system is laid well, the congregation doesn’t even realize the track is there. They are simply free to experience the worship journey design for them.

We could take this GeoTrax-worship planning metaphor for a longer ride: e.g., adding the “bells & whistles,” competing with the dad on the internet that has built a 7-mile track in his basement, my occasional obsession to build a “sweet track” while forgetting that it’s about playing with my son…but I think you get the picture.

The beauty and the frustration of it is that after each Sunday, it all goes back into the tote and waits to built again next week.