Why Everything In Your Worship Ministry is YOUR Fault

Here’s how I used to think:

People need to take responsibility for their actions. It’s their fault. Right?

A couple of years ago, I listened to the leadership book, Extreme Ownership, by Jacko Willink and Leif Babin, two former Navy SEALs. Amid the riveting stories of SEAL training and their operations in the Middle East, they taught an in-your-face lesson for leaders:

Got a bad team? It’s YOUR fault.

Here are two statements from the book that give you a taste of the smack-down lessons:

“On any team, in any organization, all responsibility for success and failure rests with the leader. The leader must own everything in his or her world. There is no one else to blame. The leader must acknowledge mistakes and admit failures, take ownership of them, and develop a plan to win.”

“The most fundamental and important truths at the heart of Extreme Ownership: there are no bad teams, only bad leaders.”

So it’s all my fault?

Yes. Yep. That one, too. Yes. Oh yeah, especially that one. Yeppers. Yes. And another big fat YES.

So maybe you’re thinking, “Hey Jon, that seems a little over-the-top. All these people perpetrating these issues have to take personal responsibility too. Right?”

You’re right. I can’t “will” these people to change. But I can take ownership for their behavior. How?

1. They are all a part of MY ministry.

2. They are all byproducts of MY broken ministry systems.

I am responsible for the systems and processes that allow, enable, encourage, create and/or perpetuate unhealthy behavior and poor attitudes.

A System For That

When you’re a leader, you can adopt the now cheesily-overused and meme-ified-to-death slogan to realize that, yeah, there’s a system for that.

Is a team member not practicing? There’s a system for that:

What is it about your process of preparation (practice and rehearsal) that’s allowing him to show up unprepared?

Is there something with your music planning or communication system that’s hindering him from getting the music in time?

Or what about that team member who’s a musical liability? There’s definitely a system for that:

Was there an inadequate audition process that failed to disqualify him?

Or maybe he came on the team when standards were lower. What kind of team member training/development system has helped him grow?

And if he’s merely out of his depth with no hope for improvement, is it fair to the team (and him) to keep pulling him along. A regular review process can help lead you and him to make the tough but needed, decision to have him step down.

Or what about the team member who tends to cancel last-minute?Again, a system for that:

What is about your scheduling process allows her to continue to do this without consequence or pressure to change?

And the above-mentioned review process could help with this, too.

Now, don’t freak out at the word systems. Systems are simply the process for you or your team to get something done.

And when you know three crucial truths about systems, you realize that you have SO much more ownership and control of your ministry. You’re no longer a victim of your team’s behavior and attitudes.

If you have a good system, you will, over time, produce healthy behavior and a better culture in your ministry.

Truth 2: You Already Have a System For Everything

…those are all systems. They might be accidental and unintentional procedures, but they’re still the “process by which you get something done.”

And this truth leads us to an even more sobering one:

Truth 3: Your Current Systems Are Perfectly Designed to Produce What You’re Currently Producing.

If your process for planning music happens on a Wednesday and the rehearsal is on Thursday, your “system” is perfectly designed to produce a non-practicing team: they don’t have time to practice.

If new team members don’t seem to know what they’re doing for the first few months, take a look at your orientation process.

Wait, you don’t have a system for that? You actually do. It’s an unintentional “OTJ” orientation process that’s working like it was designed to work.

If it sounds like I might be coming down hard on this, it’s because of this: I’m the chief sinner of bad systems.

But when I started to understand the importance of systems and how they affected my team, it was the most revolutionary leadership change in my first decade of ministry.

And so, when I heard Jacko Willink’s gruff Navy SEAL voice say, “There are no bad teams, only bad leaders,” I readily accepted that. From what I’ve learned about how systems create behavior, it only made sense.

So let’s get practical. I want to give you a tool to help you take extreme ownership of your systems.

Here at WorshipTeamCoach.com and at WorshipWorkshop.com, we’ve developed a three-part ministry building framework:

And when it comes to having effective ministry systems to help shape culture and change behavior, we’ve identified Eight Essential Systems. 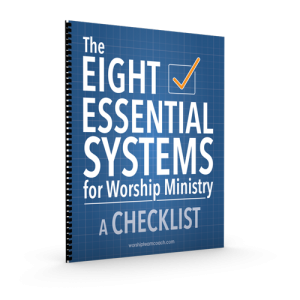 I won’t take time to talk about those eight systems here. Instead, I’ve put together a checklist tool called The Eight Essential Systems For Worship Ministry.

Not only does it give you several health indicators for each of the eight systems, but it also gives you more insight into why systems matter and how to improve them.

Let me be real—even if you don’t buy into the “extreme ownership” of Navy SEAL leadership, you can still see that, as leaders, we’ve got to own our ministry systems.

As a leader, you’re in the Parable of the Three Servants (Matthew 25). God has entrusted you with the “talents” of your team members, and the church leadership has delegated authority to you to lead your church’s music ministry.

Building healthy systems will help you make the most of those of those “talents” and ultimately multiply more for the Master’s Kingdom.

Let me say one last thing as an encouragement:

When you start looking at your systems, it’ll be overwhelming. But that Eight Essential Systems Checklist will help you navigate that sense of overload.

There are questions in that resource that will help you determine which systems are in critical need of transforming, and which ones can stay status quo for now.

Here’s that link again to get free access to it.

By the way, I’d love to discuss what challenges/issues/problems you might be up against in your ministry. We can brainstorm which systems are affecting this.

So in the discussion below, let me know what your challenge is, and I (or another coach) will jump into the conversation.