What’s The Difference Between Practice And Rehearsal? 6 Things Your Team Should Know

Several ago I had an epiphany of sorts. I thought, “What would happen if my team (including me) showed up to rehearsal with their songs actually learned?” (I know, profound, right?)

Not long before that, I had inherited a worship team that had gone a year without a main leader. It had deteriorated to pitifully low expectations: “Please just show up sometime Sunday morning.”

After a while, I succeeded in raising expectations about rehearsal (like, let’s actually have one). We even got to the point where people were showing up. But it was still a hot mess.

Enter the epiphany (of sorts).

So I set out on a crusade to get my team to prepare BEFORE rehearsal. I’ve chronicled that in more detail in other places, so I won’t go into it deeply here. But I will tell you one of my tactics:

I differentiated between practice and rehearsal.

In fact, I even came up with a mantra to help us with this:

“Practice is personal; rehearsal is relational.”

The point was this: our team was still a hot mess because we (me included) would routinely show up to rehearsal without having music learned. We neglected our personal preparation (practice).

So when it came time to relational preparation (rehearsal), we were each still focused on getting our stuff together.

We needed to stop practicing at rehearsals.

So if your worship team is in a similar place, I thought it might be helpful if I wrote about the difference between practice and rehearsal in the context of the worship team.

I’ve even included a cheat sheet version of this that you can share with your team members. Look for that at the end.

I mentioned our mantra earlier: Practice is personal; rehearsal is relational. What that means is this:

Practice is my personal preparation time that needs to happen BEFORE rehearsal (and again before services). Rehearsal is the relational time where we work on songs together. So when one person is unprepared, that affects everyone.

Whenever a team member of mine asks me “what time is practice?”, there’s a part of me (the snarky, unfiltered part) that wants to say, “Whenever you can make time for it.” I do say (without the snarkiness), that rehearsal is at 6:30 pm on Thursday.

That’s an important point. Language can help you change the culture of preparation on your team. Language isn’t just a product of culture, but it helps shape it.

So stop using the word “practice” as a synonym for your relational preparation time (rehearsal). It will help shape your team culture to view practice and rehearsal as two separate events.

Practice is the time I spend learning my part for each song. The rehearsal is about taking those different parts and putting them into a whole.

Think about rehearsal this way: it’s like a group project to create a mosaic. In this project, everyone knows what the approximate size and shape their pieces of rock or colored glass need to be. So they get those pieces ready on their own time.

But creating the mosaic with everyone else’s pieces requires additional shaping and working together. That’s rehearsal.

3. Time To Listen Versus Time To Play

Early on in my one-man crusade to stomp out non-practicing (aka slackerism), I made a decision early on to stop listening to songs at rehearsals.

Previously, if a person didn’t know their part or we couldn’t figure out the form, we’d stop rehearsal and listen. The listening breaks sometimes added up to 20 minutes or more to a rehearsal.

It finally dawned on me that listening to the song is part of the learning event. Which means it’s a practice-thing, not a rehearsal-thing.

4. Rehearsals Versus Services: The Proving Ground For Practice

I used to think the worship service was the “proving ground” for our practice. It’s not. Rehearsal is.

Rehearsal is the place where we find out how well we practiced.

It’s one thing to play through a song at home, sitting down, with no distractions, and with the ability to start, stop and slow down anytime. It’s another thing to do it on the platform with a full team and full speed ahead. What was “no problem” at home is a “no go” at rehearsal.

So rehearsal is the proving ground for personal practice. If each team member comes in prepared, it’s a dang good rehearsal.

And likewise, our worship service then is the proving ground for our rehearsal. How well we lead, play, and sing the songs on Sunday depends on how well we rehearsed together.

Which is related to the next distinction:

We need to have the mindset that our practice is a personal investment in a great rehearsal. And then our rehearsal is the investment we make together for a quality worship service.

6. Practicing At Rehearsal Versus Rehearsing At Practice

OK, so I said no practicing at rehearsal. But you can rehearse at practice?

The idea of “rehearsal” has the connotation of real. Think of the dress rehearsal for a play or musical. Everything is as it will be, except the paying audience.

I mentioned earlier about being able to play a song just fine at home. But then when it gets to the “real” of rehearsal (no stopping or slowing down, full band, standing up, etc.) the song tanks.

To help overcome that leap from “alone practice” to “all together rehearsal”, put elements of rehearsal, or real, into your practice: 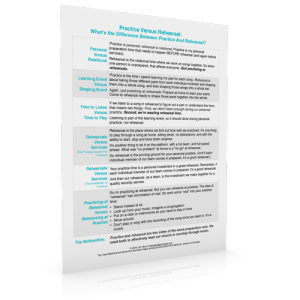 So I hope these distinctions between practice and rehearsal are helpful. And to help you even more, I created a “cheat sheet” with this content that you can give your team members.

Because let’s face it, if you sent them the link to this post, most of your team will tl;dr it. (tl;dr = too long; didn’t read.)

So the cheat sheet is essentially cliffs notes of this blog post. I stopped short of putting in pictures, but it’ll be much more digestible for your team members.

Also, if you’re interested in equipping your team to practice better, check out this free resource, The Get Practicing Toolkit. It’s a FREE training resource designed just for team members to help them know how to practice effectively (and efficiently—because they’re all busy people).

And speaking of busy, it’s all ready-made so busy worship leaders like you can train your team with minimal prep time.

Learn more about it here: GetPracticing.com

Would love to hear from you in the comment section below: Which of the differences does your team need to hear the most. Or, are there other distinctions between practice and rehearsal that I’ve missed?