Why Sunday Morning Can’t Be Your Only Rehearsal

I connect with a lot of smaller churches through our Small Church/Big Worship Facebook Group and conferences I teach at. One very common phenomenon in churches of this size is the Sunday-only rehearsal time.

And it’s not just limited to small churches. When I arrived on the scene at my current church, in the absence of no paid worship leader they had done away with mid-week rehearsals to “make it easier” on the musicians.

Oh. My. Gosh. It was horrible.

It took me the better part of 9 months to wrangle a rehearsal back into the schedule. But even then it was hit and miss for some musicians. It took several years of continual bar raising until now we have a mandatory mid-week rehearsal. No rehearse on Thursday. No play on Sunday. We still have a long way to go in the preparation department. But we’re getting there.

For some of you who only have Sunday morning rehearsals, just implementing a regular mid-week rehearsal seems like a pipe-dream. But there are some smaller steps you can take to move that direction.

The first thing is recognizing the need. You probably see it. And there might be a few key musicians who “get it.” But one HUGE step in getting your team to buy in to a mid-week rehearsal is helping them understand WHY.

Here are three reasons why. And I bet you can come up with a few of your own, too.

Five Ideas To Make The Best Of “Sunday Morning Only” Rehearsals

So if a mid-week rehearsal is out of the question, what do you do? Here are five ideas:

1. Do fewer songs and do them well. 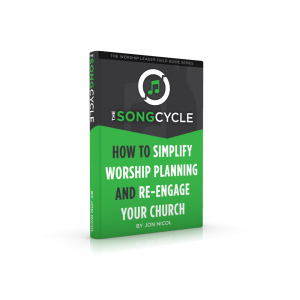 2. Use a smaller active song list. The team can know the songs better. And for all those songs, use default arrangements so they aren’t having to change things each week. (The SongCycle book can help.)

3. Get music out well in advance. Remove the excuses for not practicing.

5. Expect personal preparation. Spell out exactly what practice for Sunday should look like. Here’s a resource that can help.

6. Schedule a once- or twice-a-month practice party. Make it fun. Introduce and learn new songs. Work on fresh arrangements for songs that feel tired.

So don’t be discouraged. Just take things a step at a time. After awhile, you’ll see things start to improve.

And if you’ve been in this situation (or are in it now) talk to the rest us in the comment section below:

How have you survived (and even thrived) with a Sunday-only rehearsal.

OR…if you moved your team from Sunday-only to a mid-week rehearsal, how did you do it?