The Worship Team’s Hierarchy Of Needs

1943. The average cost of a new house was $3600 and a bottle of Coca Cola was a nickel. Oklahoma just opened on Broadway and The Great Depression had officially ended.

A baseball team owner by the name of Philip K. Wrigley gave us The All-American Girls Professional Baseball League (since his Cubs and others were off fighting the war). And a psychologist named Abraham Maslow gave us, well, a pyramid.

Actually, it was a “Hierarchy of Needs” illustrated by a multi-level triangle. Maslow was trying to show the layers of human needs and motivation. It goes like this: 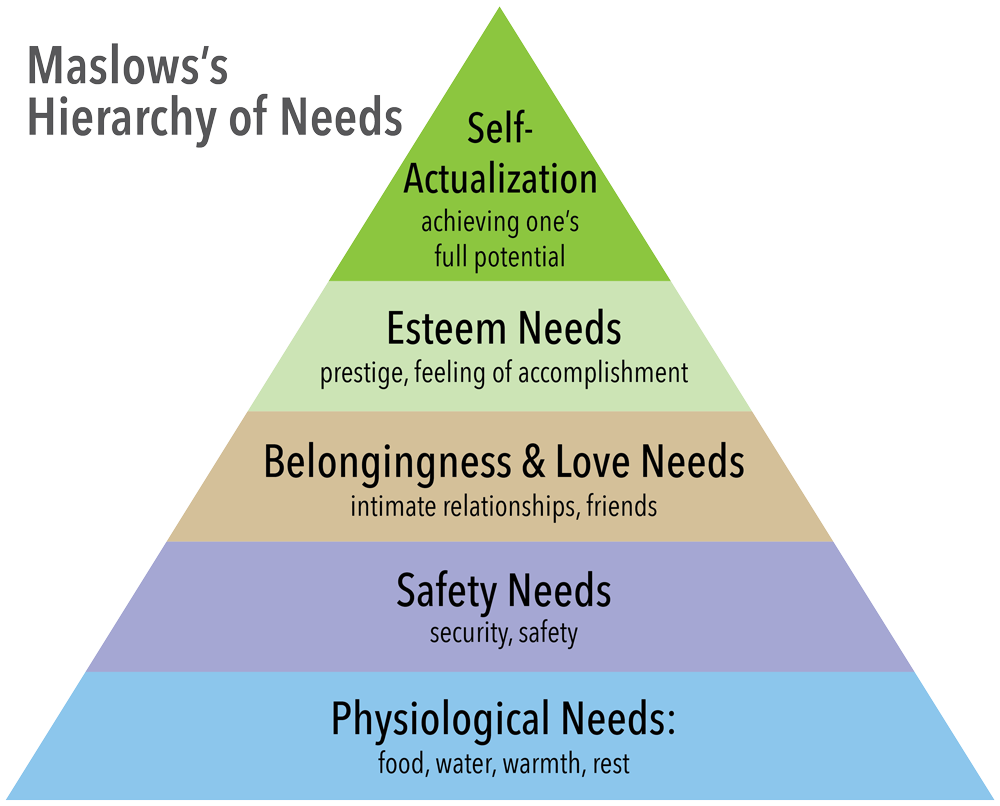 The needs towards the bottom are about basic survival and safety needs. Like, food, water, and NOT getting eaten by a bear.

In the middle needs are psychological needs like relationships and the feeling of accomplishment.

And at the top is something Maslow called self-actualization—a rather “woo-woo” term for achieving one’s full potential.

One of the things that this Hierarchy of Needs teaches us is that people don’t typically search out the higher needs unless they’ve met the lower ones. In other words, you’re not going to worry about your self-esteem when you’re being chased by a bear (whose own physiological need for food will be met nicely by you).

I got to thinking about Maslow’s Hierarchy of Needs as I was putting together the Core Path classes inside of WorshipWorkshop. This site is designed top to bottom to develop worship team members spiritually, musically, and relationally.

As I was creating these core classes, I realized that worship team members have a similar “hierarchy of needs.” And just like Maslow’s model, each “need” usually has to be met before the next higher one can be achieved.

So here are the Worship Team Hierarchy of Needs: 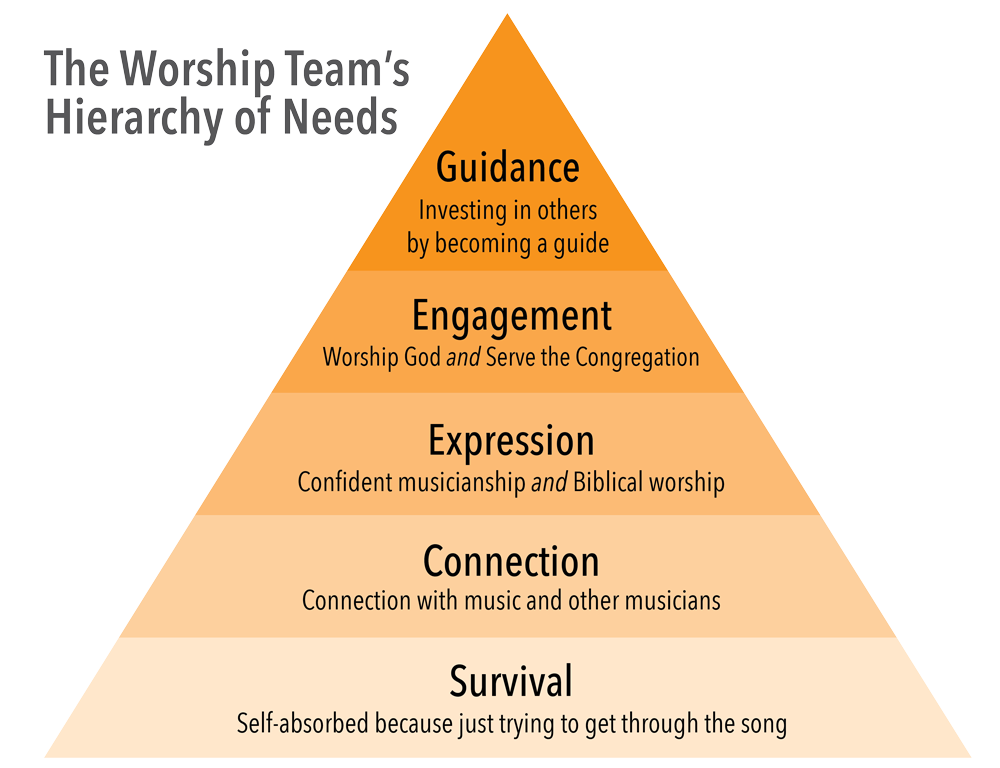 Let’s talk about each one, starting from the bottom:

Survival players are self-absorbed. Now, most aren’t narcissists; they just can’t get their heads out of their music stands or their eyes off their instruments.

Survival players are rarely beneficial to your team. If he’s a less mature player that you’re purposely developing, that’s fantastic! If he’s someone you’re counting on to carry a song, um…yikes!

The Connection level player has moved past “just surviving” and can connect with the music and the other musicians. It’s a welcome place to be after white-knuckling Elevation songs week after week.

The problem is when the worship team member stays in the Connection stage and never marries the musical enthrallment of this level to the true worship expression found in the next. For this team member, it’s too much about the music, and she won’t be able to reach the next level.

The Expression level is the convergence of confident musicianship and biblical worship. The person who reaches this level not only knows her stuff musically, but she also is able to freely engage in musical worship and show genuine expression.

This is a rewarding place to be as a worship musician. And that can be a problem. Once a team member reaches this level, he often doesn’t feel like he needs to go any higher.

But just like with Maslow’s Hierarchy of Needs, moving to the highest levels of motivation requires having a higher goal outside yourself. If a worship team member stays here, it becomes just about his musical and spiritual “fulfillment” in worship. So, we have to move to the next level.

Team members at the Engagement level are solid musicians who love God and worship Him wholeheartedly. But their worship isn’t just vertical. It’s sacrificially horizontal. They are about loving and serving the congregation whom they lead.

For instance, a worship team member at this level may study platform presence not as a way to look good, but to better engage with and serve the congregation. And she carries her love for the congregation off the platform, too. There’s no hiding in the green room between services for her. She’s out with her church family.

Now, can you imagine what your team would look like if it was full of Engagement level worship musicians? We could stop right here. Almost.

But there’s one more level that a healthy worship musician needs to eventually rise to. And that’s…

If you’re a nerd like me, you were probably eager to see what had become of Luke Skywalker in Star Wars Episode VIII, The Last Jedi. One thing was clear: Luke’s no longer the hero—the center of the story. He’s become the guide to the new hero, Rey.

At some point, every leader and team member needs to begin to take steps out of the spotlight and take on the mantle of the guide and mentor. 1 Chronicles 25 is clear: there temple musicians were “young and old” and “teacher and student.”

So some were young Luke Skywalker. And some were old Yoda.

It’s sad to watching an aging worship musician refuse to move to this level. He often becomes territorial because he’s threatened by a next-generation team member.

And don’t hear me wrong: it’s not his age that’s sad. It’s that he’s protecting and burying his “bag of silver” that the Master gave him, rather than risking and investing it. (Matthew 25)

There’s so much reward and fulfillment in becoming a “guide” on the worship team. And when leaders and team members move to this level and begin to make an intentional investment in others, the Kingdom will advance and more glory will be given to the One we worship.

A shorter version of this article first appeared in the September 2017 issue of Worship Musician Magazine. Go here to read more articles at WorshipMusician.com.

Photo by Isabella Jusková on Unsplash