Relying on the Rockstar

Ever had a super-talented musician come along that kicked up your worship team’s sound several notches?

Admit it—secretly, you wanted to schedule him or her EVERY week. I know I did.

Whenever that musician is scheduled, it’s like breathing fresh air after being stuck in a box.

But then there’s that one Sunday when they’re not scheduled. You’re back in the box, breathing the stale air of average.

Unfortunately, your congregation can tell, too.

On the weeks your high-level player is on, you get all sorts of compliments ranging from, “Wow! That sounded great!” to “That was amazing time of worship today” and even “I sooo felt the Presence of the Lord…”.

(To that last person, you just want to say, “REALLY?”)

But the very next week when the golden child’s NOT scheduled?

Now, do I have an issue with a musician joining my team whose talent is lightyears beyond the rest of the team? If he’s not a jerk (or she’s not a diva), and they’re there to serve, heck no! Bring ’em on.

But here’s the problem: too many worship leaders are waiting for that one rock star who can raise the whole level of the team.

And if those leaders do have a killer musician on their team, they’re frustrated when that person isn’t there to carry the band.

The Untapped Potential of “Average”

What if instead of relying on a rock star, we explore the untapped potential of an average team creating above-average music.

If your band understands some simple arranging techniques, it’s musical alchemy. You put plain rocks in a box, and POOF! It transforms into a pot of gold.

OK, so that might be a little overstated. But it’s the law of synergy: the whole is greater than the sum of the parts.

A band of mediocre musicians following good arranging principles will sound far better than the C-team who’s codependent on an A-player to raise their grade.

So let me give you a few simple arranging principles that can transform average musicians into an awesome band.

1. Know your place on the musical spectrums.

There are two spectrums all of our instruments and voices live inside: the sonic spectrum and the rhythmic spectrum.

The sonic spectrum has to do with the tones. Look at an 88-key piano. That’s our sonic spectrum. Most music we play won’t extend above or below these notes.

The rhythmic spectrum ranges from silence to an ADHD drummer jacked up on Red Bull.

Too many worship teams crowd one or more areas of these spectrums. A few examples:

The result is a blob of sound.

All the notes are “correct.” The rhythms might even be in time. But it’s a mushy pile of poo that not even an expert audio engineer could redeem.

The next arranging principle gets more specific about what, where and when.

We don’t have time to dig into each of these elements now. But when your team members understand each of these parts AND how each one contributes to the song at any given time, the musical magic starts to happen. 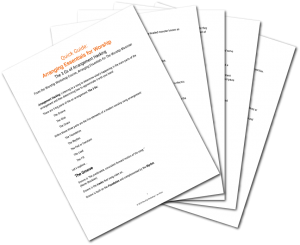 Teach your team even more arranging skills and techniques.

Get the Quick Guide: Arranging Essentials For Worship. Get access here.

The fatal flaw for too many worship musicians is how enamored they are with their own sound. When team members get their heads out of their instruments and start listening to each other, great things happen:

The mark of an immature musician is overplaying (and over-singing).

Musically and emotionally mature people don’t need to play every note of every measure of every song. Space and rest are crucial to an arrangement that accompanies the congregation as they worship.

A team who understands arranging will intentionally plan the dynamics of the song.

Too many times bands start the song at one dynamic level and stay there. Or if they do understand dynamics, they try to achieve both “big” and “quiet” with volume alone.

But the dynamic journey over the musical mountains and through the gentle valleys aren’t achieved with a mixing board fader or a knob on a guitar.

Wrap Up (And a Tool To Help)

Having that stellar player come along to raise the overall sound of your band is good. But don’t wait for her.

You can lead an average group of musicians to awesome if you can teach them some basic arranging principles.

To help you, I put together this Quick Guide: Arranging Essentials For Worship that you can use with your team. Click here to get access to that.