That movie was super engaging.

My boss and I engaged in verbal sparring that ended with my resignation.

Omigosh! You got engaged!

We were so engaged in conversation that we missed our exit.

I have an engagement with a bacon cheeseburger after work.

The word engage is rich. In various forms, it can be a noun, a verb or an adjective. Between those different forms, the dictionary has upwards of fifteen different definitions. I think the richness of the word suits it perfectly to describe a healthy worship team: Engaged.

So as we talk about an engaged worship team, what does that look like? Over this two-part post, we’ll dive into what engaged looks like, pulling from various forms and definitions of the word.

At the heart of what we’re about is leading people to worship God, through Christ, in the power of the Holy Spirit. We can draw from two definitions of engage here to clarify this:

To occupy oneself; become involved.

When we occupy ourselves with Christ, we begin to have another form of engaging.

To attract and hold fast.

It is truly God who engages us. We simply need to trust James 4:8, “Come close to God, and God will come close to you.” The more we do this, the less our hearts are “divided between God and the world.”

If your team members don’t have a growing relationship with Christ, then all the other aspects of engagement are in vain. You can build a healthy-looking worship ministry by concentrating on those other levels. And, you know, even though it’s not what we would want, I believe God will still work through that team to bless and encourage people to worship him.

(Why is that? Because I’ve been there before and God still worked despite me. And though it’s a different context, I believe the principles of Philippians 1:18 apply here.)

But how much more could a team accomplish if they are truly seeking to engage themselves with God, and be engaged by Him?

Leadership is the core of a great team. When it comes to team members engaging with you and their other leaders, there are a couple of definitions we can look at. The first is this:

To bind, as by pledge, promise, contract, or oath.

There’s a promise (spoken or unspoken) that each of us makes when we join a team: “I am committing to this team’s leadership.”

Romans 13 and Hebrews 13 both give us instructions on following those leaders above us. The first part of Romans 13 tells us that all authority comes from God. He has delegated it:

Everyone must submit to governing authorities. For all authority comes from God, and those in positions of authority have been placed there by God. (Romans 13:1 NLT)

And the follow-up instruction in Hebrews is focused specifically on spiritual leaders:

Obey your spiritual leaders, and do what they say. Their work is to watch over your souls, and they are accountable to God. Give them reason to do this with joy and not with sorrow. That would certainly not be for your benefit. (Hebrews 13:17 NLT)

As a worship leader/director/pastor, you certainly fall into this role of authority. It’s been delegated to you by your senior pastor, governing board, or other leadership entity. But remember, we are called to lead like Jesus: with strength from the authority that we’ve been given, but also serving our team members humbly and with compassionate love.

There’s another form of “engage” that is at play here for the leader and the team member, and that’s this:

Whoa, wait! We just looked at following and submitting to leaders, now we’re talking about fighting?

We as leaders need to foster healthy, ideological conflict—that is, conflict based on ideas and concepts, not tearing down another person’s character. We have imperfect team members. We’re going to need to confront issues with them.

And we’re imperfect. Our team members will need to confront us. So we all need to learn to engage in healthy conflict.

3. Engage With Other Team Members

A healthy team is comprised of people who engage with each other. And they do that a few ways. We just talked about one way:

Healthy conflict isn’t just important between the team member and the leader, but also between team members. So we need to teach and model healthy ideological conflict.

Another way team members engage with each other is:

To attract or please.

Not everyone on a worship team is going to be BFFs with each other. But a team has to have chemistry. If a team member is toxic in some way, whether, by their attitude or actions, the engagement level of the team falls.

I had a team member once who completely changed the feel of rehearsals because of his attitude. He was a wet blanket thrown over a team that normally had a blast at rehearsal. He repelled rather than attracted.

A third definition of engagement that I LOVE when it comes to teams is this:

It’s a mechanical term, but it’s a fitting word picture for a team. Just like the different gears of a machine working together perfectly to create power, team members do the same.

Each member is different, bringing different skills, gifts and personality type into the mix. But when they work together, they produce something greater than the sum of the parts.

4. Engage With The Congregation

The worship team has a two-fold ministry in gathered worship: we are to minister to God and people.

We minister and serve God through worshiping him. Through that worship, we model worship for the gathered assembly of believers.

But our service to the congregation doesn’t end there. We aren’t just playing the worship equivalent of Simon Says. We actively can engage the congregation to help lead them, which invokes this definition:

To occupy the attention of.

I like how Joel Houston said it in an interview:

“It’s a paradox: here we are on a platform, in front of all these people, (and) our job is to draw attention to ourselves in order to draw attention away from ourselves.” (July/August 2015 Issue of Worship Leader Magazine, p. 35)

To help people enter into worshiping of God, there is an element of active leadership. To do that, we need to engage the congregation musically, verbally, and visually.

Will a stoic, statue-like singer encourage others to whole-hearted worship? Will a sober-faced band member with his head buried in music stand invite people to celebrate?

Great worship team members love and serve the congregation by confidently engaging them during worship. 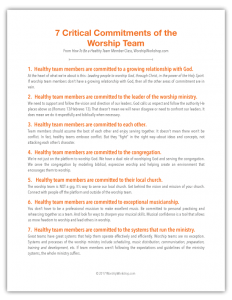 Get a free “Cheat Sheet” with all seven engagement areas. You can share it with your team and use it for discussion.

Let me know in the comment section: Which of these four ways of engagement are the most challenging for your team right now?