Five (Fixable) Things That Keep Your Team From Practicing

You can tell, can’t you?

When your guitarist gets that way-too-focused-face as he fright-reads through the chord chart.

Or how your drummer just plows into the first chorus with no regard for the dynamic change that was supposed to happen.

Or you hear the alto sliding around to find a harmony while missing roughly every third word.

Now, your keyboardist—the killer reader she is—hits all the right chords. But it sounds nothing like the recording.

And your bassist—God bless him and his fantastic ear. He picked up on the progression within the first eight bars. But he sure got busy watching the acoustic player’s fingers when everything changed in the bridge.

Or if they did, it wasn’t enough to avoid the music-stand-spooning and arrangement-murdering that’s masquerading as your rehearsal.

It’s tempting for us worship leaders to let our righteous indignation burn for our ill-prepared team members. But we’re not innocent here. In fact, if our team members aren’t practicing enough, we’re probably failing them as leaders in at least one area.

We can’t order our team to practice (or slip them a pill that induces woodshedding). But we can take ownership for our team’s commitment to learn their music.

Here are five ways that worship leaders allow, or even encourage poor preparation. The bright side is that each of these things is also fixable by the worship leader.

When your team doesn’t get the setlist until a couple days before rehearsal, you can kiss pre-rehearsal practicing goodbye. A few committed players and singers will carve out the time. But the rest will just fall victim to the busyness of life and not make the time.

So take away the excuse by getting the charts and recordings out sooner—at least a week in advance.

As the leader, when you show up unprepared, you give your team members permission to do the same.

It’s tough, I know. As a leader, you have so much going on that personal practice almost feels like a luxury you can’t afford. But when team members see your consistent lack of preparation, they will follow that standard you’ve set.

So build time back into your schedule to practice. Your personal practice isn’t just about you getting better, but it will level-up your whole team.

3. You’re listening to songs during rehearsal.

When I started to differentiate between practice and rehearsal (Practice is personal; Rehearsal is relational), I began to recognize “practice elements” that were taking up valuable rehearsal time.

One such practice element was listening to a song at rehearsal. Usually, it came as a request from a team member who hadn’t learned his part at home.

So we’d stop rehearsal for four minutes and thirty-eight seconds so one person could hear his part. If you factor in the four other band members, three vocalists, and one sound tech at rehearsal, that “personal” listening session wasted a cumulative 37 minutes of other people’s time.

(Warning: the first time you deny a mid-rehearsal listen, your team won’t like it. But they’ll remember it.

Get This Free Toolkit

The Get Practicing Toolkit will help you clearly communicate your preparation standards to your team members. 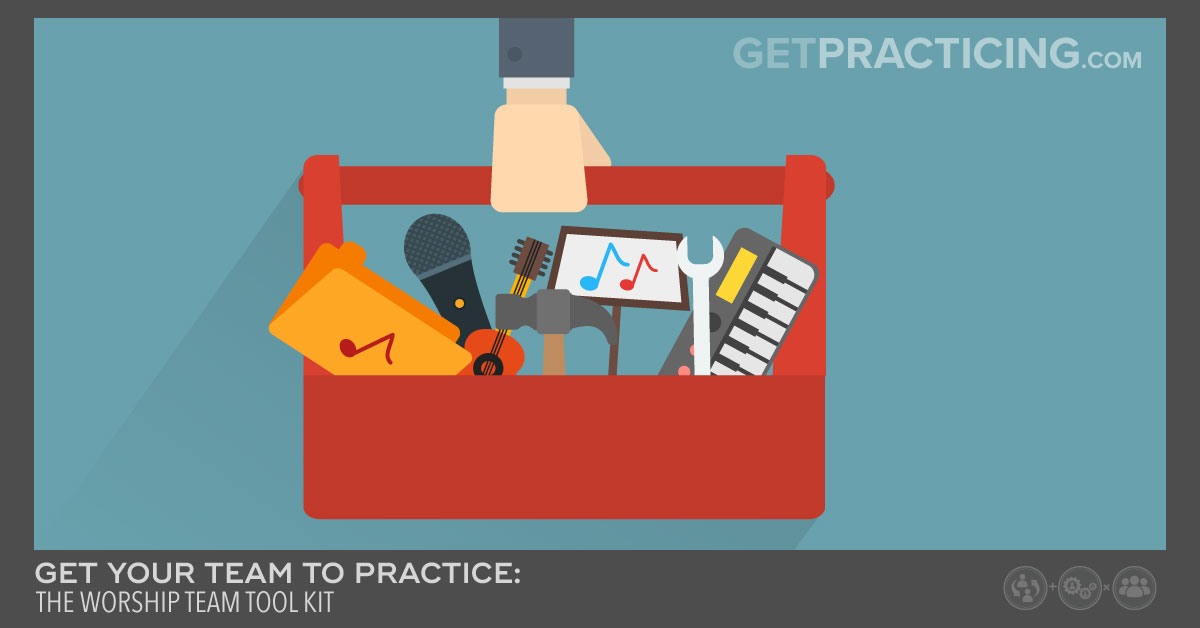 “I don’t even bother to practice. You always change how the song goes.” I heard that accusation more than once.

Early on in ministry, I loved being creative with songs. But what I didn’t realize was that my “creativity” was impeding my team’s practice. To me, it was just a chord-tweak here or a quick switch on a chorus and bridge there.

But to my team members, those changes made their practice feel pointless.

So I began to see the value in default song forms. Now for each of our songs, I chose one arrangement to be our standard. And then when we do make structural changes, it’s easier since we’re working from the same starting point.

5. No clear expectation for preparation.

Does your team even know that they should practice before rehearsal? Or what to practice? Or how much to practice?

If you’ve never taken the time to define and communicate what prepared looks like for both rehearsals and services, then your team isn’t practicing like they you want them to.

Several years ago, I created a “Preparation Policy” that spells out what we expect for practice and rehearsals. Now, a piece of paper won’t change anything for your ministry. But after you’ve clearly communicated your expectations (and fostered team buy-in), you’re now able to start holding team members to that standard.

I said at the top that these were all things a leader could fix. But do you notice something else in common with each of these issues?

They’re all parts and pieces of a “system of preparation.” A “system” is just how you or your team gets something done. When it comes to preparation, it includes all of these components and more:

So next time someone shows up unprepared, ask yourself: “What part of the system is allowing or even encouraging this behavior to happen?” When you figure that out, it becomes a fixable issue.

The Get Practicing Toolkit will help you clearly communicate your preparation standards to your team members.