Practice By Numbers: Setting Clear Expectations For Your Worship Team

How does this song go again?

Do you hate that question during rehearsal as much as I do?

You planned the setlist three weeks ago. You uploaded the charts and mp3s to the worship planning app. You wrote out the band and vocal notes outlining who plays what where. And you’ve said time and again, “Show up prepared for rehearsal.”

And then at rehearsal someone asks: “How does this song go again?”

He might not ask it audibly, but he doesn’t need to. The look in his eyes as he fright-reads the chart tells it all: he didn’t practice.

One of the most important leadership lessons I learned a while back is this:culture trumps everything. The culture of your worship team determines their behavior. I realized I had a culture that didn’t value preparation. So, I set out to change it.

Changing The Culture Of Preparation

I wrote a “Preparation Policy” that spelled out the team’s expectation for preparation.

I had private conversations with repeat offenders.

I gave my team members tip sheets and sent them article links about effective practice.

I worked at modeling preparedness and tried to run great rehearsals.

I even changed our language.

I made sure I didn’t call our rehearsals “practice.” Practice is about each of us learning our individual parts. Rehearsal is about coming together to form the “whole.”

"Practice is personal; rehearsal is relational" became our mantra.

Over the course of a couple years, things vastly improved. But I still felt like they weren’t fully getting it. I realized we talked about being prepared, but I had never really explained what “prepared” looks like.

To a few volunteer worship musicians, “prepared” means having their music down and maybe even memorized. To most, it means they’ve pounded through the chords of the song fifteen minutes before leaving for rehearsal.

The first step of this was an easy fix: be clear about what they are to practice.

I made sure I stopped assuming that the electric guitarist would learn the opening riff to a song or the keyboard player would lay down a B3 pad during the bridge on that same song. Now I spell out those details in the rehearsal notes for each song (which are accessible by everyone in our online worship planning app).

The second step has been tougher. How do I communicate the extent to which they should practice? I can’t just dictate a time frame: “Practice at least one hour before you come to rehearsal.” For some of our experienced musicians, they can be ready to go in 30 minutes. For others, it could take them that long to learn one song.

Since musicians are all different, I needed something that would spell out “what” I expected without dictating the “how.”

I turned to the Four Stages of Competence. If you’ve never heard of it, it’s a fairly simple explanation of how we move from complete incompetence to mastery in anything. Here are the four stages:

In the context of learning a worship song, the tune isn’t even on my radar yet.

2. Conscious Incompetence: I know that I don’t know.

I see a new song on the schedule, and I realize I need to learn it.

3. Conscious Competence: I know it, but it requires conscious involvement to execute it.

I’ve “learned” the new song, but I’m still focused on the mechanics of it. It’s not yet “natural.”

4. Unconscious Competence: I know it, and I’m not even thinking about it as I do it.

It’s “second nature.” This level of competency explains how I can be simultaneously singing, playing guitar, and leading the congregation all the while thinking about where I’m going to eat lunch after the last service. (Oh come on, admit it: you know you’ve had those moments in worship.)

Rather than use these tongue-twister terms I decide to make the concept easier to convey by using a number scale.

Take a look at the chart below:

On the continuum, 1 and 2 are about Learning. Learning moves us from conscious incompetence to conscious competence.

In fact, memorization can take place here before we get to a 5 on the practice scale. I can have something memorized, but still think about the mechanics of it—that is, I need to consciously recall the lyrics or the chord progression.

5 is Mastery. I've memorized the song AND it just flows like Free Bird from a Lynyrd Skynyrd cover band. It’s where muscle memory takes over; the song is second nature.

So, with this learning continuum, I can now more specifically spell out the extent I want my team to learn songs: “Please have each of these songs to a 3 by rehearsal. By Sunday, I’d like all of them to be at a 4 or 5.”

A word of caution here: don’t expect 5s for every song every week. As a team of volunteer musicians who are playing different songs every week, pushing for mastery is unrealistic in most cases. In fact, it might be counterproductive.

The law of diminishing returns is at work here: the difference between a 4 and 5 is probably imperceptible to most people in our congregations. But the effort that it takes to move a song from “knowing” to “mastery” is significant.

For most of your team members, they will reach mastery after preparing for and playing a song many times over several Sundays. So it’s important that we rotate only a limited number of songs in our worship sets to help our team to truly know the songs. (And the repetition has an added bonus of helping the congregation to sing the songs from the heart and not just the screen.)

Making It Your Own

To make this easier for you to use with your team, I’ve made a Practice Numbers chart available for you: 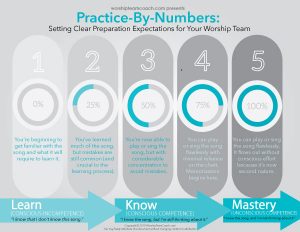 I also created a video that explains the concept that you can use with your team members. Here it is:

And, yes. For free. Go to worshipteamcoach.com/prep5 to get your Get-My-Team-To-Practice Care Package for free.

By the way, if this Practice By Numbers video works for you, great! If you would rather take the principles and develop your own guidelines, that’s great too. I just want to help you transform the culture of preparation on your team for the better.

By the way, I'd love to hear from you in the comment section below:

1) If preparation (or lack thereof) is an issue on your team, tell me about. Feel free to ask questions, or offer some insight about what you've done to change the culture of preparation in your team.

2) Let me know if you think this video & chart will be helpful. Or after you use it, let me know if it was helpful. 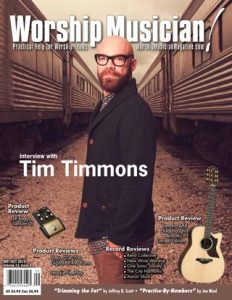 (Note: This article first appeared in the September/October 2015 issue of Worship Musician Magazine. Thanks to Bruce Adolph for permission to republish it here.)