5 Ways To Plan Transitions In Worship (Without Killing The Flow)

Has This Ever Happened?

The worship team ends the song. There’s a smattering of applause from the congregation.

The singers are smiling. And then…silence.

The band looks at the acoustic guitar player.

The acoustic guitar player looks at the keyboard player.

The keyboard player gives him a twitch of the head that says, “You’re playing the intro, not me.”

The singers continue smiling but are now glancing over their shoulder to see who’s starting the next song.

The silence is finally broken, but only by the shuffling of charts by the guitarist. He gives the worship leader the universal “One moment, please” sign with his right index finger.

The worship leader wants to give him back a universal sign of her own, but instead says to the congregation, “Let’s move into a time of prayer.”

Transitions matter in our worship services.

Not for the sake of a slick performance, or to coddle consumer-Christians, or even to avoid the gooey awkwardsauce of moments like this one.

Great transitions are about us, the leader and team, doing the work to help people stay focused on worshipping God.

We don’t want them watching my capo change. Or my chart shuffling. Or enduring some off-the-cuff prayer I shoot off because I forgot to plan how to get from Bb to E.

We’re encouraging people to journey along a path of seeking God. So let’s be intentional when we’re planning transitions in worship.

To get you started, here are five simple ideas for intentional segues between moments of worship.

If you’re ending a big song, applause can be a fitting response. During that physical expression of praise, start the next song.

Now, some churches wouldn’t applaud anything less than the Second Coming. So this might not work for you. But if you are leading a clap offering, clearly focus your applause upward to God.

And make sure the band is participating in this, so there’s no sense that we’re applauding the performance rather than our King.

As one song ends, use the keyboard, some ambient guitar work, or a MacBook to play a warm pad during the transition. If the two songs are in the same key, perfect! Keep the pad moving from one to another. If they aren’t, cross-fade in the pad on the 1-chord in the new key as the outro of the first song dies down.

(Need pads for worship WITHOUT adding another musician? Explore Coresound Pads. Don’t know how to use pads in worship? Learn here.

If you need a musical segue to cue a song in a new key and you don’t have a pad, consider just using the 5-chord of the new key.

You could even add a few chords to the progression to get there less abruptly. But keep it simple. A meandering string of chords can distract people, too.

The 4-chord is the “chief loiterer” of all chords. It’s stabler than the 5-chord, but it doesn’t feel final like the 1-chord. So it’s a great place to linger.

Some light strumming on the guitar or broken chords on the piano can sustain that moment indefinitely. It’s an ideal place to offer encouragement, read scripture, pray, or invite a response.

When you’re finally ready to transition to the next song, have another instrument start the next song as that chord fades out.

So what to you do when you have to move from an uptempo tune to a slower one, or you’re moving from a dynamically big song to a quieter element in the service?

Choose a specific section of the first song to repeat, but in a softer, slower, and more solemn manner. And tell your band to chill during those moments. Less is more here. 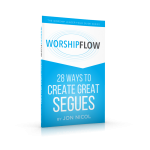 The bottom line when it comes to segues and transitions is this: don’t try to wing them or leave them up to chance. Plan them. Practice them. Be intentional.

And if you want more ideas, check out my handy reference guide, Worship Flow: 28 Ways To Create Great Segues.

Photo by freestocks.org on Unsplash